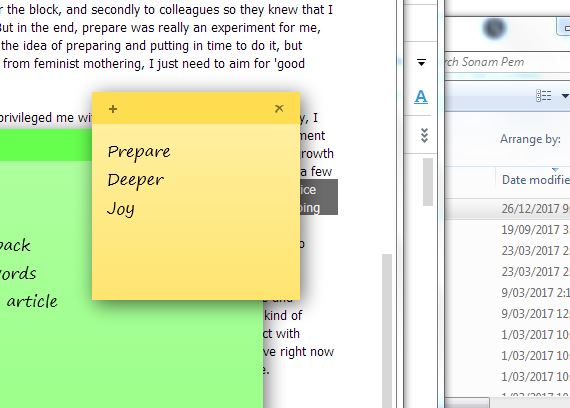 Prepare, deeper, joy. For 2017, these were my touchstone words, reminding me of the things I was to ponder and experiment with this year. Choosing a word for the year is something a little bit more open to the unknown, a little less goal-driven and anxiety producing than deciding how much weight to lose or giving up working weekends or something. 2017 was the second year I chose a set of words to reflect on for the year, and they emerged almost in direct response to the words used in 2016 — quality, connect, and complete.

Reflecting on 2016’s words helped me crystallize what I wanted to focus on for 2017. For me, the words are about personal and spiritual growth, in the context of a career path in feminist geography breaking down the separations between work and home, public and private —  a personal commitment that is, of course, always political. On reflecting on my 2016 words, I noticed that when I prepared well for something, the quality of that work, conversation, worship service, meeting, writing, or lecture was more assured. I noted also that when I prepared to take time off or time to myself for growth, I was more likely to take it. Hence the learnings from 2016’s ‘quality’ directly fed into choosing ‘prepare’ as a word for 2017. In the same way, thinking about the theme of ‘connect’ in 2016 helped me notice that the connections I had made — for friendship, work, mentoring and so on, as well as new theoretical connections in my writing — had emerged out of relationships I had already (with people or bodies of work), rather than new ones. Hence 2017’s word ‘deeper’ came out of a conscious commitment to deepening connection with what I already had rather than broadening out and making lots of new connections (although this happened too, and indeed is my natural inclination). In 2016, reflecting on ‘complete’ — which was chosen as a push to get writing done and ‘out the door’ but came to mean more to me during the year in terms of seeing and holding my own ‘completeness’ as a person — led me to choose the word ‘joy’ as a way of consciously paying attention to the possibilities of joy emerging from completeness in the present moment.

Like 2016, the words took on slightly different meanings as I returned to them during the year. My post-it note is faded and yellow and sits above my computer screen in my office. Prepare. Deeper. Joy.

After an initial flurry of early preparation for my teaching in semester one, I found myself working longer and longer hours for only a minor increase in quality. It became clear to me that it was not possible to prepare everything I needed to do to a high degree of quality, but that I needed instead to prepare myself differently for different tasks. I have, for a number of years, been experimenting with time-blocking as a technique for getting stuff done, and in the end this was the way to get the preparation done: allocate a certain number of — realistic — hours to a task and just get done what could be done in that time. It’s better than NO preparation, but it doesn’t leave me working until midnight to get something just a little  bit better. I also had to communicate these time blocks with others — firstly to postgraduate students so they would get me material to review in time for the block, and secondly to colleagues so they knew that I did have something on my radar but was going to do it at a particular point in time, not right now.  But in the end, prepare was really an experiment for me, and I’m not sure the extra work and time away from the family really worked for me. I’ll take away the idea of preparing and putting in time to do it, but perhaps not prepare as fully as might ensure perfection or high quality — perhaps, to take a phrase from feminist mothering, I just need to aim for ‘good enough’.

Beginning with taking the chance to respond with greater vulnerability and honesty with those who privileged me with their trust and seemed trustworthy, I hesitantly jumped in the ‘deeper’ end this year. What I have found is that consciously operating out of a space of vulnerability and an intentional commitment to going deeper into myself led to deeper connections with others. Last year, someone on this blog suggested I looked at the Enneagram as a spiritual growth tool, and that decision led to a much deeper understanding of myself and a few key others in my life. Another friend gave me a small card that outlined a few key themes we might consider as we take an honest look at ourselves and our motivations. Taking the time daily to reflect and also to meditate or practice centering prayer has been key here, and I have found the work of Cynthia Bourgeault, Henri Nouwen and Richard Rohr helpful in guiding these times.  Going from being a person mostly focused on connection with others into deliberately developing space to connect with my own needs, desires, thoughts and feelings meant that the word ‘deeper’ also took on a different meaning from what I first intended (which was more along the lines of making grown up friends!). Deeper connection with my own self surprisingly led to deeper connections with others.  I guess this hardly a new spiritual insight for most, but I think I really only grasped this for the first time.

Joy — what to say about joy. At this point in time, as I wrote in the post Advent Doings , joy is a tricky one. But one of the things I’ve learned in life and deepened this year is paying attention to what is, rather than what might be, as a source of joy. What I will say is that sadness has led to a kind of fragile joy, where I know each moment is precious and might be taken away. I’ve slowly been reading The Restful Mind by Gyalwa Dokhampa, who asks us to reflect with gratitude on what we have, then also to imagine that it might be taken away. This ‘change meditation’ induces one to consider how what we have right now can be appreciated and even bring joy. Joy has become a space of small moments and decisions rather than an overall state of being, at this time. These thought come relatively late in the year though: for most of the year, I used joy as a touchstone to help me decide what to do, much in the same way I used ‘complete’ in the previous year. I continued with yoga, with singing, with cuddling my kids for way too long in the mornings,  with gardening, with prayer,with writing, with long talks with friends, with occasional blogging, and with supervising way too many postgraduate students because these things give me genuine joy.

I haven’t yet decided on what next year’s words might be. 2017’s words came on a long solitary walk after several weeks of reflection! I imagine the pattern will be similar — reflecting on what these themes have taught me about myself and how I operate in the world, and where I might like to go.