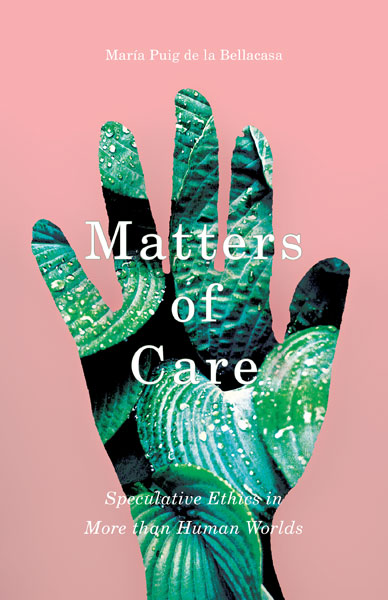 I am about three chapters in to Maria Puig de la Bellacasa’s book Matters of Care: Speculative Ethics in More Than Human Worlds.  In the same way that Richard Rohr seems to express my thoughts before I even am conscious of having them in the area of spiritual practice and belief, Puig de la Bellacasa seems to do the same for me in terms of feminist and social theory.  It has been one of those books where I have been actually nodding and smiling while reading, and not being able to stop myself from underlining particular bits that seem right on the mark to me. I will write a review at a later stage, but for this post I want to think a bit more about what de la Bellacasa calls ‘thinking-with’ and ‘dissenting-within’.

What does it mean to care about our scholarship, and to work as scholars openly committed to certain politics, groups, ideals, or ‘matters of care’? De la Bellacasa draws on Latour and Haraway to develop a concept of thinking-with, where scholarship is not so much a matter of correctly establishing the facts (I wrote about this in another post) but of advancing thinking around a matter of care, a matter of care that may indeed be a committment to thinking-with others who care, and dissenting-within a wider tradition or group. I find this a useful way to think about scholarship, and one can look to the loving-critique from within that feminist scholarship often practices, for example, challenging thinking without needing to destroy others’ work which one might not agree with.

With my own work, particularly the difficult piece I’m working on now, this is certainly helpful in moving forward and explaining my difficulties in getting it written. There are so many cares that assemble in the article I am writing, and the cares of others too. What I am trying to do is create a ‘thinking-with’ and ‘dissenting-within’ piece of work that effectively communicates what I am wanting to say in a way that others can really hear. Because in my experience, ripping someone’s matter of care to shreds is not an effective way to communicate your point — it ends up just positioning you ‘on the other side’ or as ‘an outsider who does’t get it’. But if you dance around what you are trying to say too carefully, it is not expressed clearly enough for anyone to really get it! Tricky, indeed.

With regards to thinking-with others who think in the Christian tradition, there is something here too. How do we think-with and dissent-within that tradition in a way that doesn’t contribute to the woolly liberal/immoveable fundamentalist binary? I think this is what I have found so compelling about Rohr’s work: the ability to draw on ancient Christian tradition to create space within, to make ‘conservative’ that which is often feared as ‘liberal’ (I think here particularly of his work reclaiming mysticism), and also to draw in people from the intellectual margins of Christian thought through generous ecumenical thinking-with that makes ‘liberal’ ideas that are ‘fundamental’ to Christian faith (I think here particularly of his work on the trinity). This to me really illustrates the practice of thinking-with and dissent-within, a practice based on a deep and committed care for ‘the Church’, in much the same way that Haraway’s work is based on a deep and committed care for feminism, even as she transforms it and challenges it.

But as de la Bellacasa herself says near the end of Chapter Three, it is not enough to just think-with (or think-for), we must also live-with, presumably with concrete and complex action. How will this living-with play out in the book? I’ll let you know.